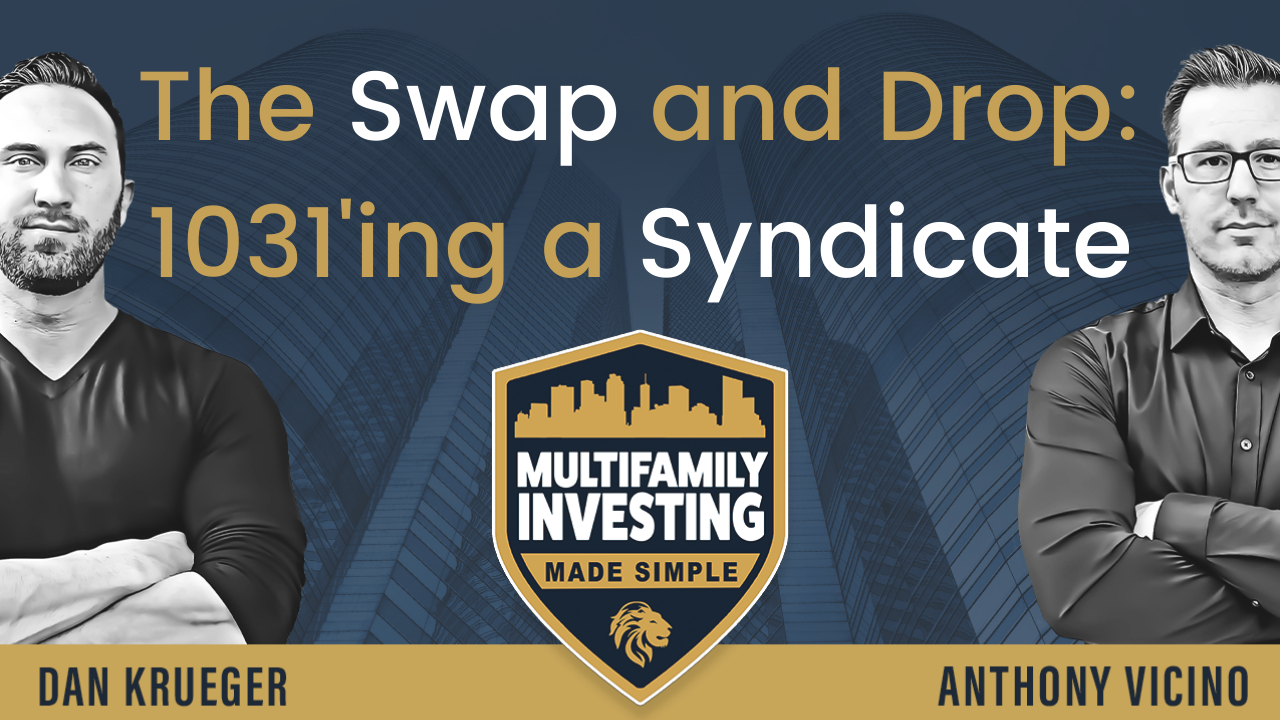 For today’s episode, we will be talking about a couple of questions in the syndication world. Can we 1031 out of this deal?

This week we’re going to go over the specifics of a swap and drop.

We will talk about these things…and more in another episode of Multifamily Investing Made Simple in under 10 minutes.

The audible version Passive Investing Made Simple: How to Create Wealth and Passive Income through Apartment Syndications coming soon!

“If you are looking for 1031 opportunities and you’re investing in syndications now, you’d know that this strategy is a resource. So it’s just a matter of finding operators who could facilitate that” – Dan Kreuger

“They’re asking is like their individual limited partnership share in the deal, they’re wondering can they 1031 out of that to offset the tax liability and go into a new deal?” – Anthony Vicino

Anthony Vicino: [00:00:15] a Well, to multifamily investing made simple to a podcast that is all about taking the complexity

Anthony Vicino: [00:00:28] I’m taking the scenic route. Kruger. Mm-hmm. And whereabouts are you these days?

Anthony Vicino: [00:00:35] Oh, hey, there he is. Now, if you guys are listening to the podcast, you have no context for this. Did you know that you can go and listen? Watch all our podcast episodes on YouTube. Go to the channel! Multifamily investing is made simple. You can watch us right now. Share all the things that we’re sharing with you. Now, if you’re in the car, don’t do that. That’s a bad idea. You should just focus on driving and listening. Now, Dan, today we’re going to talk about an interesting topic, which is the swap and drop. The heck is that that is a fantastic question. I was hoping you could answer it, but OK, I’ll take a shot at it. Now we get a lot of questions in the syndication world from investors saying, Hey, can we 10:31 out of this deal? So generally, when somebody is asking that question, what they’re asking is like their individual limited partnership share in the deal, they’re wondering can they 10:31 out of that to offset the tax liability and go into a new deal? The answer? No, you cannot, because the name on the deed needs to match the property that you’re leaving and the property that you’re going to, and you can’t do that if you’re part of a syndicate or can you enter the swap and drop? Dan, tell me about the swap.

Dan Krueger: [00:01:40] Yeah, it’s a tricky little strategy that we. Full disclosure we have not done this, but we get the explanation on how to do this very recently from the go-to guy for this thing in our area. Mr. Jeff Peterson quickly shouts out to Jeff. So the way you can, Josh. Oh yeah, Josh. Josh too.

Anthony Vicino: [00:01:58] Yeah, yeah. Two people, the two very highly respected individuals. And this is a very lesser-known strategy that was not on our radar until these two gentlemen thankfully pointed it out to us and we dove into it and it’s like, Oh, this is really cool.

Dan Krueger: [00:02:10] So so the yeah. So like what Anthony said was when you want a ten-point thirty-one from one property to another to successfully do that, the name on the deed of the property you’re exiting needs to match the name on the deed of the property that you’re going into. So in the case of syndication, there’s going to be an LLC that holds attached to the property. So it would be like one to three Main Street LLC. And so the one two three Main Street LLC needs to be the entity that owns the property that was relinquished and the property that it’s going into. And so if you’ve got syndication with 10, 15, 20 people in there, it’s kind of tough for just one person to 10:31 out and go into another deal. You can’t only do it. That entity needs to be the one that is in both transactions. And so that could be a little tough because if you need to get 15 or 20 people to all be on board with that, maybe it works. Maybe they all agree, and they’ve all got the exact same game plan and it works perfectly. That would be awesome. Probably not going to happen. So at first glance, you might think that it’s not an option to 10 30 one a syndicate from one property to another. Enter the swap and drop. So really, the nuance here is that you don’t need the individual members in that syndicate to be the same. It just needs to be the entity and you need to have the same number of members. They don’t need to be the same person. So Joe Schmo could decide that he wants to leave, and Jane Schmo decides that she wants to come in on the next deal so you can effectively swap out Jane and Joe Schmo. I know I’m using these names for you just need to have the same entity.

Anthony Vicino: [00:04:06] So the way this would work, let’s say, is we have our syndicate of 15 investors and we have our property. Let’s say Schmo Roseville, because why not? So we have Schmale as well, a nice 50 unit apartment complex, and we have 15 investors in it and we get to the end of the seven years of our holding. We’re like, Hey, we got this other opportunity over here, SMOS Town. So we want to take Roseville and sell it so that we can 10:31 into schmooze town. So what we’re going to do is we’re going to sell the one, we’re going to buy the other, but everybody has to stay in the deal at this point. So this is the swap. We’ve just swapped our properties and now it’s time for the drop. And this is where any investors that were along for the ride that want out now they can be bought out. We can recapitalize, bring in new investors to take their position. And this is helpful because now we just had a capital event so that we can accurately peg what their equity is worth. And so they’re not necessarily taking it at a discount, which is one of the issues with selling your shares early is that it’s not marked to market very consistently or very often, and so at all, at all.

Anthony Vicino: [00:05:12] Short of a capital event or a refi, you know, like so you’re probably going to have to sell at a discount. Not the case in a swap and drops. So that is very overly simplistic. Strategy and this was also actually come to think about it, so Jeff, Josh, and then Roger Roger also was sharing his experience, having done a couple of these with me. And it’s a really cool strategy. It’s something that again, we’ve never done it. It’s something that we’re exploring in the future because it’s really interesting. It’s an interesting way to serve our investors by not hitting them with the tax liability. It’s also a way for the investors that want out of the deal to do that. It’s a way for investors that don’t want to, like, have to go and find another deal for their money and pay the tax in the meantime to just roll it forward. So it’s really interesting.

Dan Krueger: [00:05:57] Yeah, I mean, that’s it, that’s it, that’s a swap and shop. I’ll tell you. So yeah, I mean, if you are looking for 10 30 one opportunities and you’re investing in syndications now, you’d know that this strategy is a resource. So it’s just a matter of finding operators who could facilitate that because it is a thing for a long time. I thought for a long time that just wasn’t an option. And if you wanted to do a 10 30 one with a larger syndicate, you’d have to get into this convoluted tax structure. And so now it’s, you know, we’ve got another tool in our toolbox. So I think it’s safe to say we’ll definitely be doing this on future exits. So let you know how it goes.

Anthony Vicino: [00:06:36] Oh, let’s know. So hopefully that was interesting. Hopefully, that was insightful and put something new on your radar that you maybe hadn’t heard about before. If you’re an operator out there, this is maybe a new tool in your toolbox. Go talk to your lawyer until your 10:30 one qualified intermediary and figure out like Hey, how would this work? Maybe you can do it if you’re a passive investor. This is a worthwhile question to ask if your operators. Granted, most of them are probably going to look at you and be like, Wait, what’s that? They’ve never heard of it. And that’s it’s kind of obscure, but it’s a pretty, pretty neat little tool. So that’s going to do it for us, guys. Hopefully, this brought you some value if it did do us a favor. Drop your review over on iTunes. Just go over to Apple iTunes.com. That’s not a real address. You’re going to have to google it or just pull it up in your iTunes. Well, how

Dan Krueger: [00:07:27] Over on items, wherever that is, and you’re making the sound way more complicated than this. Oh, it’s actually really easy. Thank you. That’s it. You guys, next week.