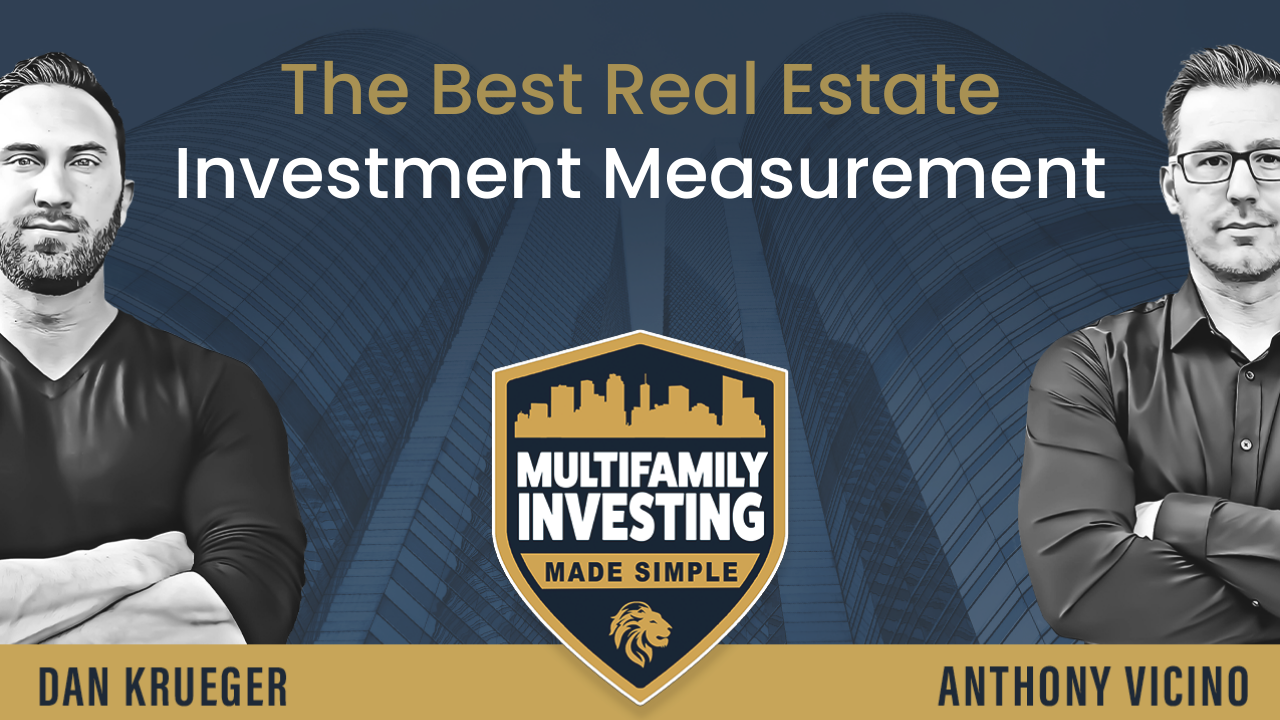 So what the heck is a cap rate? That’s a great question. If you’re looking at multi-family deals, you’ve probably heard this term and today we’re going to unpack exactly what the heck a cap rate is.

Don’t forget to check out this bonus episode on Youtube, Dan uses his handy spreadsheets throughout the video, so you’ll definitely want to see that!

Find out, in another bonus episode of Multifamily Investing Made Simple!

[00:00:00] Dan: So what the heck is a cap rate? That’s a great question. If you’re looking at multi-family deals, you’ve probably heard this term and today we’re going to unpack exactly what the heck a cap rate is. Let’s get into it.

Hey, what’s going on. It’s Dan Kruger, Invictus capital. And today we’re talking cap rates. We’re going to demystify these things for you because they are not intuitive, but they’re actually not that complex either. Uh, so the first thing you need to understand about a cap rate is it’s a multiplier that is used in the valuation methodology of commercial properties.

So this would be large multifamily properties, basically anything over five units, as well as industrial and retail. And. Pretty much all industrial or, or I’m sorry, all commercial real estate, which technically multifamily falls into, um, it’s a multiplier that’s used in the valuation methodology and in these assets, uh, the value of a [00:01:00] property is based on the income it derives.

And when you apply a multiplier to that income to derive the valuation, which this concept is what got me hooked to in, in hooked on multifamily investing in the first place, because it’s so much more quantitative and so much less subjective, uh, than the smallest. Uh, single family home market, or basically anything up to a fourplex is going to be valued basically on comps.

And so somebody down the street selling a similar property for a price point, that’s completely out of whack with reality will impact the value of your property, the multi-family space and the larger multifamily space. Uh, you don’t have nearly as much risk that kind of thing. Uh, a multifamily property is going to be valued, just like a small business.

It’s all about how much cashflow that thing is. And so a cap rate is effectively saying, uh, the market needs to make X percent return on a certain type of property in a certain place, uh, in order for, to, um, you know, be, be a viable option. [00:02:00] And this is assuming that all cash is paid. So we’re not going to take debt into the equation.

So this is basically saying is, uh, if we’re in a forecast, Uh, rate environments. That means the market is demanding a 4% return for this asset type in this area. And so if we were to purchase this asset in all cash, the net income, which in this case is $260,000 needs to be 4% of whatever we bought the thing for.

So real quick refresher net operating income is just all of our income minus all of our operating expenses. Equals our net operating income. So if I were to buy this property and all cash, a $260,000 better before percent of whatever I paid for it. And the same 5%, the same 6%. So one of the less than intuitive parts about cap rates is that they are inversely correlated with value.

So as cap rates go up. That is saying that the market demands a higher rate of return for this asset class, which means they’re willing to pay less because the same net operating income needs to be a [00:03:00] higher return on a percentage basis. So if something is a forecast, um, the price is going to be a heck of a lot higher than if it’s a six cap, same building, same income.

Uh, it’s all just what the current market environment. And what we want to illustrate here is how big of an impact the cap rate actually has on the value of a property. So that when you’re looking at deals that you’re thinking about investing in, you could look at that proforma and, and know that if that operator is.

You know, off on their projections about cap rates, or maybe just too optimistic, uh, that there could be some risks there that you want to uncover and unpack and ask some questions about. So for this example, to illustrate this concept, what we’re going to look at is the exact same property with the exact same NOI, under three different cap rates scenarios, we’ve got a four cap, a five cap and a six cap.

And so if you’re looking at a proform. And you’re currently in a five cap environment and your operator is, uh, expecting that cap rate to drop by the time they [00:04:00] exit and, uh, get to a four cap. Let’s say five years from now, you know, it’s important to understand, uh, what happens if they’re wrong by even half a percentage point, or you get a full percentage point.

So we can see here, uh, NOI is the same, all three here with a four cap to derive the value. All we do is divide the net operating. By the cap rate and that derives the value. So you can see the formula here. If I highlight the cells, we’re just dividing $260,545 and 92 cents by 4%. And that gives us a valuation of 6.5, $103 million, not too shabby, but what if they miss the mark on their proforma?

Uh, what if the cap rate actually just stays the same and it doesn’t go down over the next five years. All of a sudden the value goes from 6.5 million down to 5.2. That’s over a million bucks off, it’s actually 1.3, zero, $2 million off, which is substantial and what they really miss the mark. [00:05:00] What if it actually goes up to 6% by that time?

Now we’re down to 4.3 million. That’s a total range of $2.171 million. Uh, and all we have is a 5% change into a four. Or a 5% change to a 6%. Uh, it might appear like a small difference when you’re looking at, uh, uh, pro forma for a deal. Uh, but if you’re off by even a half a percent or a quarter percent on these Capri projections, then you’re gonna see.

Big difference in the economics of your deal and what you can actually sell that property for, or refinance it for at some point in the future. So for this reason, uh, at Invictus, we’re always very conservative with our pro formers that we always assume the cap rate is going to go up. Even if we don’t actually think it’s going to go.

We always underwrite assuming that it does, uh, because we don’t know what’s going to happen in the future. We would love cap rates keep going down. There’s a lot of economic factors that are encouraging that to happen, and we expect it to, you know, stay pretty stable or even go down a little bit over the [00:06:00] next couple of years, but we always want to make sure that our deals are going to work.

Even if the cap rate goes up consistently every single year that we don’t. That’s a pretty stringent underwriting practice. And it means that a lot of deals don’t meet the hurdle for us. Uh, but we prefer this method because when things do change, we’ll be prepared. So I hope this video helps clear up what cap rates are and really more than anything.

I hope this emphasizes how big of an impact they have on the economics of a deal. So when you’re taking a look at those performance, going forward, take a very close look at those cap rate projections that your operator’s putting in there. If you guys have any other questions about this, don’t hesitate to reach.

Check out multifamily investing made simple anywhere you find podcasts. We’ve got tons of content that you guys are going to enjoy. See you in the next week. .