In What Order Do YOU Make Your Money? 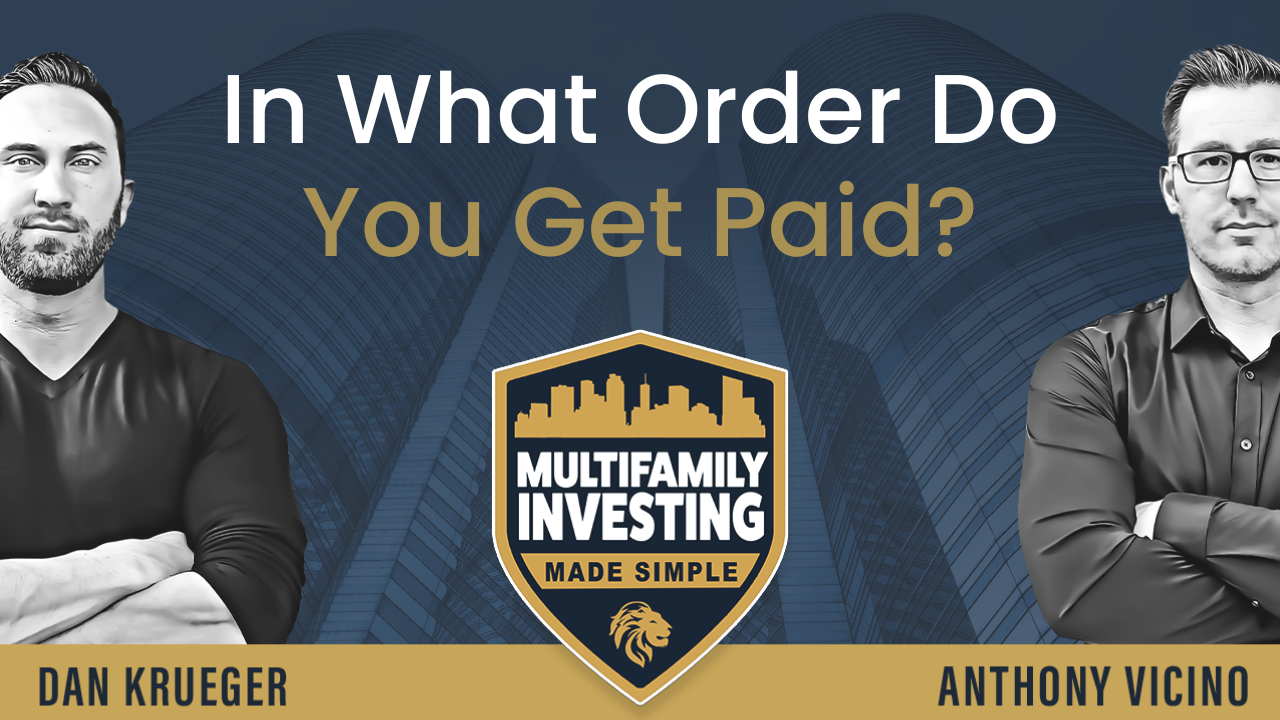 If you’re investing in a real estate deal… in what order do you get your returns? Maybe you thought everyone got their returns at once. Well, not in a waterfall structure.

In today’s episode, Dan and Anthony are going to break down the waterfall deal structure, how it works, and why it’s used. The most important part of this structure is understanding who gets paid and when, because not every waterfall structure is the same.

So… in what order do YOU make your money?

All of this and more on this week’s episode of Multifamily Investing Made Simple, In Under 1o Minutes.

“One cup is the GPs. The other ones are the LPs cup, depending on how we split the equity, those are gonna fill at different rates.” – Anthony Vicino

In What Order Do YOU Make Your Money?

[00:00:00] Anthony: hello and welcome to multifamily investing made simple the podcast. It’s all about taking the complex with real estate investing so that you can take action today. I’m your host, Anthony Massino victim’s capital joined as always by Dan. I only got.

Usually we go over. Yeah. So dear

[00:00:32] Anthony: listener, hold us to this. If we start rambling, if we start going a little bit long, just raise your hand, tap us on the shoulder and say, Hey guys, guys, let’s wrap it up. Let’s be brief. Let’s wrap it up. Oh, okay. Um, okay. So you can’t actually reach through the, the, the earbuds and tell us that, but you can go to iTunes and leave us a review and say, Hey, you guys need to like, be less.

Long-winded get to the point. Okay. So go do that. We appreciate the review. Now let’s get to the [00:01:00] topic of today’s conversation, which is waterfall.

Yeah. All right. A waterfall. If you have ever reviewed an, an offering memorandum from an operator has got a deal. Uh, I think Mo more than more often than not most operators are including some kind of waterfall structure in their deal. And what that means is it’s the order of operations for how monies are paid [00:02:00] out in.

Um, almost like a mortgage has a first position on a property, right? You are obligated to pay your mortgage before you pay anybody else. If there’s a default or something, the bank gets first dibs, right? They get paid first. So a waterfall structure is similar in that it dictates who gets paid, how much and what, and the best way to visualize this, in my opinion, is.

Close your eyes. Imagine a waterfall. If you’re driving, don’t close your eyes. Imagine a waterfall with a couple cups below it. Um, we’ll keep it simple. Just two cups first. And the way you can look at those cups is, uh, different hurdles that need to happen in a deal. So the one that most people are familiar with is probably the preferred return.

Um, in that case on even the simplest deal, uh, like the way we’ve done, a lot of our deals in the past is we’ve got a simple equity split. With our investors, 75, 25 meetings, 75% of all monies go to the investors, but we, [00:03:00] the operators don’t get any money until we, after we hit a certain hurdle. That means all the water from that waterfall is going to get paid out to those passive investors first.

And then only after that first bucket is filled up. Do we start to partake in some of the profits? I’m going to pause there for a sec, kind of unpack that first stage of the water. Yeah, that

[00:03:21] Anthony: makes sense. Sort of. So in this, in this example, with your cups underneath there, underneath the waterfall, and I think of them like a pyramid there, they’re kind of staggered like a pyramid and one cup is at the very top and that’s your preferred return.

Right. But that is now once that first cup has been filled and overflowing. Now the other two cups will fill sound.

[00:04:18] Dan: Right? I think so. I think so the question is, do I just wanted to do a lot of jazz? I mean, it sounded beautiful the way you described it. Trickling. It was very therapeutic bringing some sort a little garden, but in any case, really, I think the, the main.

People need you understand is a waterfall structure is going to tell you the order in which people get paid. Um, and there’s an order of operations that needs to take place there and you can get more complex and have additional hurdles and say, okay, up to 7%, the limited partners get everything. Then after that it’s split 75, 25, and then after another hurdle, it might get split 50 50.

Only 25% of that water is filling up the GPS

[00:05:22] Dan: cup. Yeah. And there’s, if there’s still some more water left over here after 15%, let’s say there’s, there’s one more level here. Um, this isn’t uncommon to see, uh, that might shift again. So as the deal does incrementally better, the way those monies are paid out might shift.

And so maybe at 15%, when the, when the deal starts to produce that level of returns, then the profits are split 50 50, but it’s only the, the water that’s left over after those two buckets that gets. So this would be a wonderful one for visual. I feel that we need to create some sort of,

If you want to shoot us an email, Anthony Invictus multifamily, we’ll [00:06:00] create something and show it and share it with you. So you can kind of visualize this if you’re a visual learner. But so again, let’s, let’s say we have a 75, 25 split up with a 7% preferred return and that 75 25 split is going to stay in effect until the LPs achieve a 15%.

Once they achieve a 15% IRR, every dollar above that is going to now be split 50, 50 let’s that’s, let’s say that’s our structure. So let’s imagine how this works. First is our cup at the top, which is our preferred return. And that has a big 7% on it. Once it fills up and LPs get their 7%, every, every bit of water is going to flow down.

25% goes to the GPS and 75 goes to the LP, but the LPC. It’s only 15% big. That’s their IRR. Once it gets to that 15% now their cup is overflowing and all the overflow is going to be split into two cups down here. That’s equally sized 50 [00:07:00] 50 for the GPS and the LPs. And so there’s a couple of tears here, but I think just generally seeing a picture of this would be very helpful.

So if you’re the. Shoot me an email. We’ll get you out. I’ll doodle something for you.

[00:07:12] Dan: Yeah. And I think even with simplify, when we do that, maybe we get rid of the percentages and use whole dollars. There you go. Would probably be even better. I think percentages even just kind of complicated a little bit more than it needs to be, you know, that preferred return bucket could just be, there’s a hundred dollars in distributions that preferred return for that past investor might be seven.

Right. So the first $7 goes to the LPs and then the remaining 93 gets split. Maybe we use, hold on. Yeah, we can do that too. We’ll see.

[00:07:36] Anthony: We’ll figure it out. And it has at its core, the waterfall is really just a way of helping understand who’s getting paid when like that’s at the core. When you hear the term waterfall, that’s, that’s what it’s referring to.

So, uh, that took us about seven and a half minutes. What are we going to do with the remaining two and a half? You got,

So let’s, let’s, uh, sing that solo cup song and then the hit the highway. What’s the solo cup song. Then they’re like a country song and it’s all about solo cups. Oh

[00:08:15] Anthony: if you’re listening to this and you know what I’m talking about, Pull out your phone, uh, record yourself, singing that song and send it to me.

Cause that would really make my day. Um, if you knew all that, you should probably just leave a review too, because you already know exactly if you’re going to go that far. Leave me a review. Yeah. All right. So that’s it for us. Yeah, that’s all we got. Um, we’re gonna wrap this up a minute and 30 seconds early because we’re though we’re those kinds of guys that good, where that good don’t even need to nailed it.

All right. So guys, we appreciate you taking some time as always, truly, like, it means a lot to us, the support, uh, leaving. Tuning in. It’s awesome. We love it. So thank you very much for being here and we’ll see you in the next episode.[00:09:00]