Why Does The IRR Peak… And Then Decline? 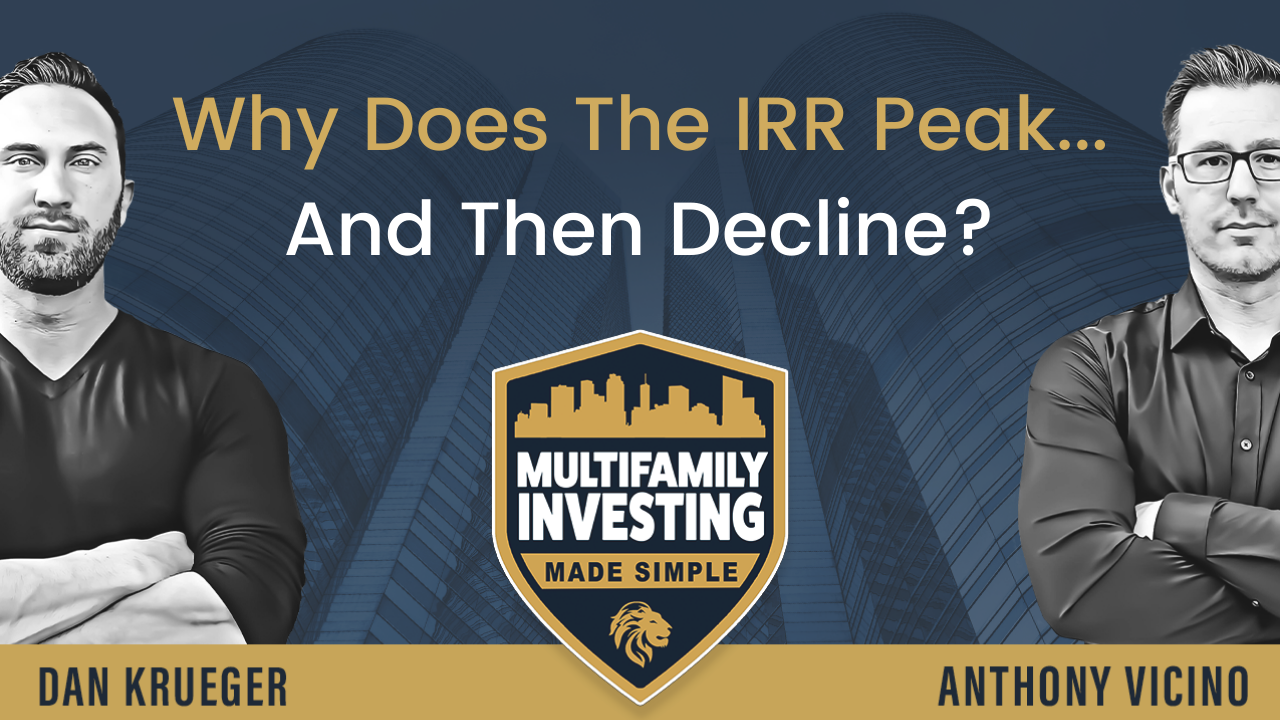 Up or down? Up then down? What is going on with that IRR? In today’s episode, we will be discussing why the IRR peaks, and then declines.

Join us as we discuss why the IRR seems to rocket up, then plateaus, and then… even trends downward. And we explain it all in under 10 minutes!

We will talk about these things…and more in another episode of Multifamily Investing Made Simple in Under 10 minutes.

“ Passive Investing Made Simple, where we dive into more detail and start to break it down a little bit more clearly. ” – Anthony Vicino

“ The internal rate return technically is, without getting too geeky on you, the discount rate at which the net present value of future cash flows is zero.” – Dan Krueger

Anthony Vicino: [00:00:13] Hello and welcome to the multifamily investing made simple podcast, it’s all about taking the complexity out of real estate investing so that you, yes, you are at home. Listening to this right now can take action today. I’m your host. Anthony Vicino of Invictus Capital, joined by Dan. Let’s make this quick Kruger, which is apropos because this is an under 10-minute episode. So, Dan, let’s make it quick, quick. The other day I was talking with an investor. They had the question why when I’m looking at all of this pro forma these marketing packages for these syndications, why is it that the IRR always seems to peak in years five and seven or five through seven, not like five and then skip six and then seven, like usually somewhere in years five to seven. You see the IRR kind of go plateau and then start ticking back down. So why is that? What’s up with that?

Dan Krueger: [00:01:19] I apologize to everybody. Anyways, why does IRR peak now? You’re five to seven. That’s going to vary depending on the type of deal, but. You’re almost always going to have some kind of peak of the bell curve or not, really bell curve, but there’s a bit of a peak on the IRR. Yeah, the bell curve, it’s curvy.

Dan Krueger: [00:02:44] That means that if you wanted to calculate the present value of all the future cash flows you’re going to receive, let’s just say twenty-two percent is your IRR. That’s the discount rate that’s going to make that present value zero and make you break even basically. So what I’m trying to say here is that as time goes, most of the deals that people are looking at are going to be value-add deals. And so there’s going to be some sort of kind of initial thrust at the beginning, whether it’s a, you know, upgrading units to drive higher income or bring the expenses down and usually within the first couple of years, any operator who’s coming in and doing a thing, they’re going to have done the thing. And at that point, they’ve just got kind of organic growth into the out years and that’s not going to be that substantial. And so what they’re going to be seen is their rent growth might be three, four, or five, six percent in the out years, but the discount rate for those future cash flows is substantially more than that. And so the internal rate of return is going to start to tick down. And what that basically means is that the incremental return on your money is actually getting less and less efficient after a certain point. So that peak of the curve on the IRR spectrum, basically, if you’re looking at one year to year three or four five all the way up to 10 if you look at all those possible hold periods and you’re noticing that the IRR peaks around your four or five, that’s actually kind of telling you that that’s probably the most efficient spot to take those chips off the table and move to somewhere else.

Anthony Vicino: [00:04:12] Now the thing there are a couple of things I’ll point out here is that when the IRR starts to drop, it’s not dropping off the cliff. It’s starting to tick down relatively slowly, you know, so it might be like you’re five were hitting a 20 percent IRR. It’s not like in year six, it’s suddenly going to be 15 percent. It’s not just going to like plummet, it’s going to go down to like nineteen point seven and nineteen point five. It’s going to be a slow grind. And so when you’re looking at it and you’re like, if you’re going to buy and hold an asset for life, like and you’re trying to think of like maximizing your return, well, I mean, if you want to maximize the percent return, yeah, selling your five. But continuing to hold isn’t necessarily a bad idea either, depending on your goal now. I answered this question the other day in a seminar, and the question that somebody asked me, I’m going to pose it to you now is what is the discount rate? What discount rate, the discount rate?

Dan Krueger: [00:05:05] In general, yeah. How much you make in the market investing. So what is that? It’s unique. Yeah. So every individual, there are standards out there, seven, eight percent kind of a standard discount rate when you’re discounting cash flows. But it’s unique because the rate I can get in the market is a lot different than my mom could get.

Anthony Vicino: [00:05:24] So this is yeah, this is really interesting. It is relative. So I just read the IRR viewpoint.

Dan Krueger: [00:05:30] And by the way, the IRR viewpoint report is in no way related to internal rate return.

Anthony Vicino: [00:05:36] It’s internal, it’s like Integra Realty or something like that. Yeah. So but in there, but in there they do have a chart of different discount rates for different markets and different asset classes. And in Minneapolis, and this is the answer that I gave was that it’s usually somewhere between six and eight percent. And that’s like, what could you go out there and realistically get? It’s a

Anthony Vicino: [00:05:57] Yeah, yeah. Textbook in the air report six point zero. Five percent in Minneapolis. I was like, Oh, OK, so that’s pretty dead-on. What’s interesting? Here’s an interesting correlation that you could think about is the preferred return that a lot of operators are offering. Their deal is going to very closely correspond with whatever that discount rate is. So it’s pretty much saying like the preferred return is saying if it’s seven percent hey, you as LP or the passive investor is entitled to receiving a seven percent return on your cash before we take any money, which is a way of saying like that is the market expectation of what alike you could get somewhere else. And therefore that’s the minimum barrier that we need to hit before we can take more. So that’s an interesting little correlation. Yeah. So anyway, getting into the weeds, this is kind of a weedy episode, but hopefully, it may be helped answer a question about, you know, why our peaks, maybe what discount rate is, how it relates to anything. So if it didn’t help you at all, if you’re more confused than ever, then I encourage you to go pick up the book.

Anthony Vicino: [00:06:58] Passive investing made simple, where we dive into it in more detail and start to break it down a little bit more clearly. Hopefully, maybe there’s some charts and some graphs and things that maybe help it make sense a little bit more. So that’s going to do it for us, guys. I appreciate you dance over here dancing with the book. And I do want to point out that earlier for our podcast guest, when Dan suddenly went, Oh my close up, I had changed the camera angle. And so now he was close up. So if you want to see Dan’s close up, go to YouTube. Check out multifamily investing made simple where you can see all of these podcasts episodes in the flesh. You can watch our pasty selves talking on camera. I highly recommend you go subscribe to the channel and if you don’t, then that’s fine too. Ok, so that’s going to do it for us, guys. We’ll see you next week. I like.

Tagged apartment syndication,investing,joint venture,multifamily,passive investing,real estate,syndication
← If We Had To Go Somewhere Else To Invest... Where Would We Go? Is Value-Add Multifamily Investing Dead? →