How Is Wealth Defined? 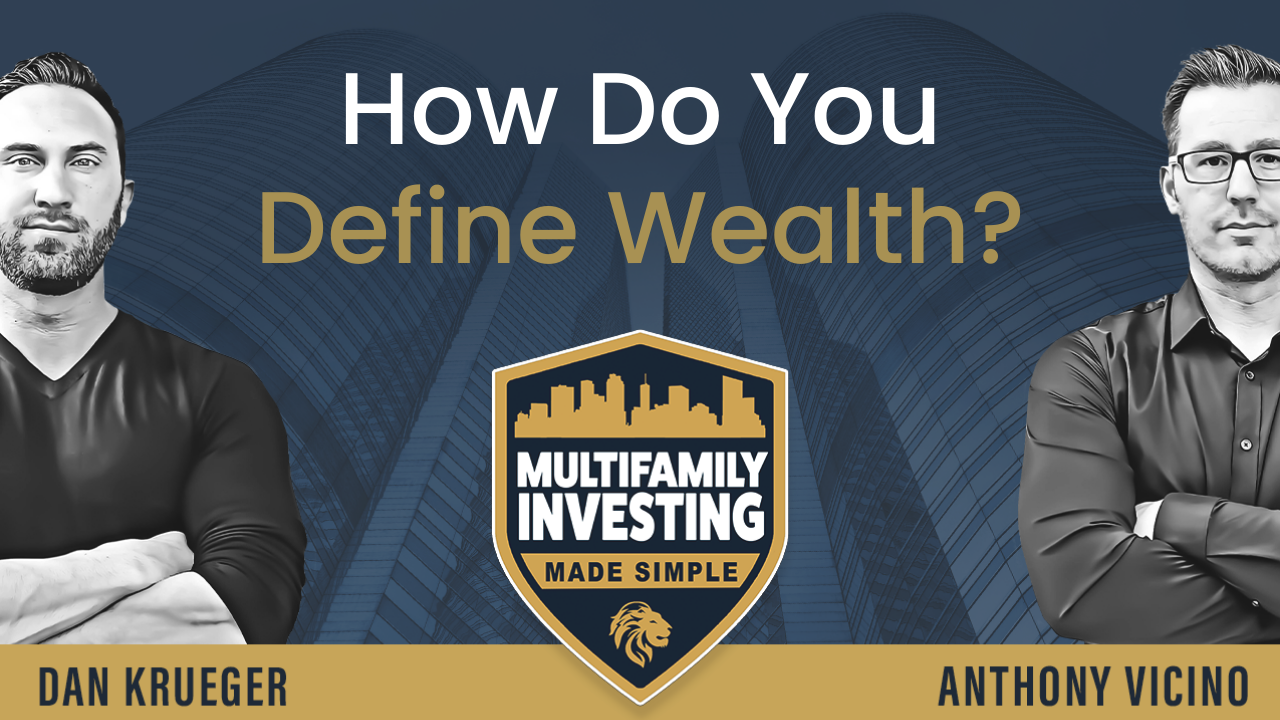 How would you define wealth? Do you often look at people like Elon Musk and Bill Gates, and think… “I’ll never be as wealthy as them?”.

Wealth should be defined by the gap between your expenses and your income. The bigger the gap, the more comfortable someone lives.

So…how big do you want that gap?

All of this and more on this week’s episode of Multifamily Investing Made Simple.

“Wealth is a ratio between what you make and what you spend.” – Anthony Vicino

“High income does not equate to wealth.” – Dan Krueger

How Do You Define Wealth

[00:00:00] Anthony: welcome to multifamily investing made simple. This is the podcast. That’s all about taking the complexity out of real estate investing so that you can take action today. I’m your host, Anthony Pacino of Invictus capital joined

Dan, you sound exhausted by this Krueger.

[00:00:37] Anthony: told me right before we pressed record that I I’m really on one today. My energy is high. Yeah. I’m bringing the energy on this late Friday after you’ll pep in your stand and read or over here, just like a couple of mopey Molly’s and I’m like, I’m a happy.

[00:01:00] Anthony: if you guys are listening, if you guys have heard that episode, I don’t know when this, what the order of these podcasts that we record go out in. So maybe this is actually coming out before that other episode, in which case you’re very confused and people are like, what the heck is it about Bussa you’re going to want to tune in book review to the book review of the one thing which is coming up here, I believe next week.

Um, and you’ll hear all about. And we don’t even get to the book. We don’t talk about the book we just talk about today. Today, today. I want to talk about a concept I tweeted about, and there’s a couple of different aspects that we can unpack, but I think they’re all apropos for an investing podcast where I think it can get really, a lot of people get into real estate because they want to make money.

Let’s just be completely honest, right? Like they want financial freedom. They want to create generational wealth and all these things. And a lot of that. That money only makes you happy up to a certain point. And then beyond that, it just kind of it’s there and that’s great and more money causes more problems.

[00:02:22] Dan: Yeah. So it’s basically just a. You know, how much wiggle room do you have between your income and your expenses? Because I’ve used the example of, you know, some famous celebrities who’ve gone bankrupt, a lot to, to illustrate to people, um, who are close to me that aren’t really quite as financially savvy.

Realizing that there’s going to be a tax bill at the end of the year, which happens a lot. And all of a sudden they’re negative, right? Um, high-income does not equate to [00:03:00] wealth. You could be at a very low income and have an incredibly low cost of living. And I know people are like this, uh, that would be considered much wealthier than Astro P or, you know, Uh, really famous people who are given a ton of money and somehow spent more than that.

And so really people would spend way too much time looking at income, at least in this country, in our society, they look at income and they don’t look at the Delta between the income and the expenses, which is what it’s all about. Because I got to say when I was, uh, in high school, Probably minimum wage.

Uh, I had no debts. I had no liabilities. Um, I think I’d like a car payment technically, but all in all I I’ve made like maybe 20, some grand a year with my jobs going into college, 20 something. And my, my liabilities are so damn low. I had a decent amount of, you know, I had enough free cash flow to just, you know, live life, graduate from college, get my first job.

Uh, first salary. Uh, amazing. It was more than my parents had ever made in their entire lives in one year. Um, but student loans kick in and rent [00:04:00] goes up and all these things change in net, net. I’m actually, I have less cash to work with. I got broker, uh, I’m making quite over twice as much. And I was like, oh, I wasn’t expecting that.

This sucks. Um, so

[00:04:17] Dan: Got me. So I was like this, this blows. Um, but I think that’s a really important distinction because so many people are just so focused on the income side, they see people’s incomes and they’re just like, assume that they must be in great shape financially.

But it’s like until, you know what, the other side of that, uh, equation looks like expenses and liabilities. Like you don’t know, like those Instagram people might just be throwing everything on their credit cards when they’re on vacations, it might all be rented, you know, you know, What someone’s actual wealth is unless you actually see their balance sheet.

[00:04:42] Anthony: Yeah. And here’s, here’s the second part of this then. So if wealth is a ratio between what you make and what you, um, what you spend, like that’s totally within your control. So the question you have to ask yourself, as in, why do people spend so much more than they, they, they need to keep up with the Jones.

And this is where the second part [00:05:00] is. It leads to people being so damn unhappy. It’s wealth is not a ratio between what you. In what somebody else makes. And that’s, that’s what people, they don’t like. Jeff Bezos makes the Gillian dollars. Like I must, I I’m poor. And it’s like, he has

That’s another important one. As some of these people that have like really high net worth that you he’ll talk here, talked about a lot. Doesn’t really mean anything because a lot of these guys are pretty cash poor, and they don’t actually have income per se, but all their wealth is tied up in something, a liquid that could fluctuate in value, like Bezos, for example.

He’s lost about a hundred million dollars on paper. Yeah. Right. So it’s like, it didn’t really have it or did it just happened to kind of yeah. It’s paper money. Right. So, but I think that comparison thing [00:06:00] is key because honestly, no matter how much you make or how big the Delta is between your income and your expenses, even if you’re nailing that, if you’re always comparing yourself to somebody else, Your lifestyle is going to suck.

Um, in this, in this world of real estate and investing people, people expect you to show up in a certain way, like just the part. And you’ve got to drive the car and I don’t drive the car. I drive a little Prius C and I like to point it out to people because it kind of, I get crap about it from people. Um, it’s like a $10,000 car.

I have no debt on it, but the thing is like, I don’t care because I’m not trying to impress. I’m not trying to compare to other people that have the nicer thing, because I know I know what my wealth is. And that’s again, like the thing that you can’t. Right. Like, unless you can look at my bank statement and you can’t see [00:07:00] that thing.

And so if you’re trying to compare yourself, your reality against somebody else’s, when you can’t even in, in any objective way, know what their true reality is, right? Like, I don’t actually know how much debt you’ve incurred to do that thing to have that life. Then I’m, I’m setting myself up for a life of perpetual disappointment because the game is a hundred percent rigged against you.

If that’s the rules that you’re playing by. But if you play by the rules of, Hey, wealth has a ratio between what I make and what I spend, I’m going to spend less and I’ll focus on making more, but just keep that Delta high and

Um, cause I grew up in a very kind of lower middle class income family as far as like the income concerned, like the, the quality of our life is amazing. But like the income was, you know, on paper it’s like pretty low. Um, but I didn’t even notice. Right. Uh, my mom was a whiz at somehow stretching a dollar so far that I wasn’t even aware that there was a stretch [00:08:00] there, but there was enough of a Delta that we could get by.

And I was so happy, but. Like had no money, but it didn’t matter. Everyone was happy. Right. Cause they were focused on the stuff that matters. We weren’t comparing ourselves to the Joneses within we’d lived pretty much right at our means, but like just enough below so that, you know, it was good. We weren’t upgrading lifestyle a lot and it was, we didn’t need money to be happy,

So this is maybe a weird, uh, podcast episode where we’re not really talking about multi-family investing, but it is important because as you’re pursuing multifamily, investing passive income streams and like generating wealth and financial freedom, all these things just realize like, How, how are these things really measured, right?

Like that’s going to be the key instead of creating some false dichotomy over here that you will never be able to live up to just get off Instagram. You’d get off of Instagram. That’s not helping anybody. So like make sure that you’re judging yourself, uh, along the metrics that truly matter. Um, if you got some value out of this, go drop a review.

[00:09:02] Anthony: I dated myself. Okay. Now you guys know it’s true. Um, that’s it. That’s all for us. We’ll see you guys in the next episode, make sure that you check out that episode next week on the one thing where we talk about the , you’re going to love it.