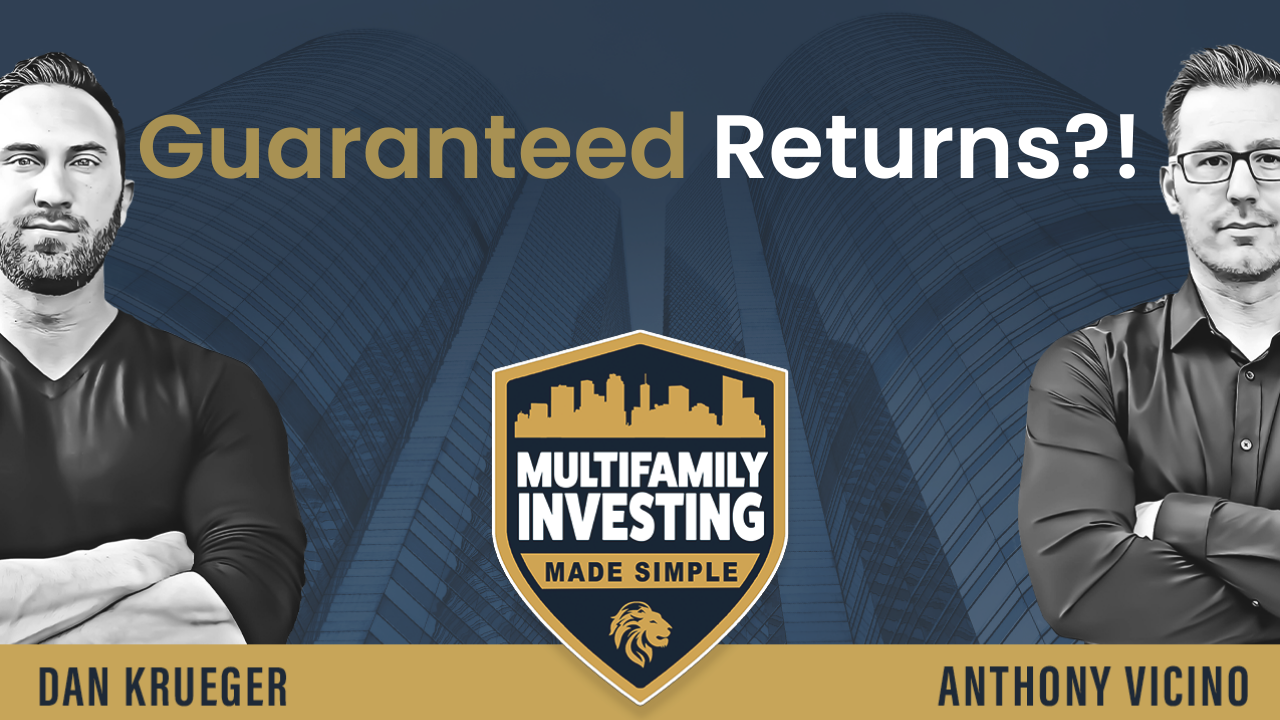 Today we are discussing unicorns, leprechauns, and other make-believe things…

If you hear an operator say those words, you should turn the other way. There is no way for someone to guarantee your returns on an investment.

The idea of Guaranteed Returns completely goes against the idea of investing… risk! Now, that risk might be higher or lower, depending on the deal, but it exists in every deal. If there were true guarantees, everyone would be rich.

The trick is finding an operator(s) who can adequately describe those risks to you.

All of this, and more, on another episode of Multifamily Investing Made Simple, in Under Ten Minutes.

“If you’re investing in something that has risk, there’s no guarantee. That’s why you’re getting paid, because of the risk you are taking.”  – Dan Krueger

[00:00:00] Anthony Vicino: Hello and welcome to multi-family. Investing made simple to podcast. It’s all about taking the complexity out of real estate investing so that you can take action today. I’m your host, Anthony Vino of Invictus capital joined by the one. The only Dan life insurance is a scam Kruger. I didn’t say that I throwing you under the bus.

It’s my favorite. That

[00:00:21] Dan Krueger: would IPL, uh, never you’re the bus coming. Two, two, here it comes. You’re under scam. We’re actually in the process of purchasing. So right now, literally as we

Yeah. He’s actually been a, he’s been really great. And guys know life insurance is not a scam. It can be. Um, but that’s neither here nor there. Maybe we’ll unpack it a little bit, um, as this episode goes on, but this is a fairly short episode. And today I wanna bring to you the listener, something that really ground my gears this week on social media.

Yeah. The puny version though, where it’s just like, I’m flailing kind of like. Um, I saw

Okay. So that was me triggered and I was kind of being like, and granted, I was like being a bit of a jerk there, but, um, I don’t think this person saw it. I did not [00:02:00] direct it at them at all. I was just making a broad statement that guaranteed returns, anybody telling you that, that dairy have a guaranteed return is either lying to you.

or they’re stupid and not that’sa

[00:02:11] Dan Krueger: because generally speaking, that is a red flag, because if you’re investing in something, that’s got risk you’re. It’s not guaranteed. That’s why you’re getting paid is for taking risk. The risk of not making

Somebody came in and said, you know, Anthony, usually I would agree with you. Um, in most cases, this is true, but in my company actually provides a product. I was like, oh my God, he just transitions straight into pitch mode. My company provides a product that does offer a guaranteed return and it has for the last 120 years.

And it was a life insurance thing. That’s why I was saying scam what life insurance is not a scam, but here’s the thing that I told this guy, you know, I’m curious to get your, your thoughts on this. I was like, here’s my big problem with [00:03:00] the term guaranteed return is that all I need to do is provide one fringe case where the guaranteed return no longer.

Returns and your whole concept falls apart. Right? All I gotta do is provide one fringe case and it can be super extreme and hyperbolic, but it proves to concept. And if I can prove, if I can create a scenario where your guaranteed return is no longer guaranteed, then you shouldn’t call it a guaranteed return.

You should call it a very likely to happen return. But guaranteed is a way of attracting unsophisticated investors who just don’t know better. Yeah.

[00:03:34] Dan Krueger: Yeah. And it’s, it’s different with insurance too, because if you’re trying to pitch an investment, that’s got a guaranteed return. Definitely a big red flag with insurance.

And so, yes, there’s a. Guaranteed return on what I think the cash value or something. We’re not life insurance experts by any means. We need Ryan for this, but that guaranteed return of X percent is on a dollar amount. That’s less than what you’re actually paying in. So it’s like, I mean, it’s, it’s in my mind, it’s a stretch because it’s just, you’re not saying you’re guaranteed return.

What are of it is, is. I dunno, what is it usually on

[00:04:25] Dan Krueger: Yeah. But it’s on like the cash value, which is less than you paid in because some of the money that you pay in goes to actually buy the insurance. So it’s like, I dunno. Yes. It’s technically guaranteed, but it’s deceiving because that return is on a dollar month smaller than what you actually are paying in.

[00:04:42] Anthony Vicino: So well, even you, even there, like in that, yes, there is a product that’s. That goes by this term. But even like, then I, I still get so triggered because I’m like they could go bankrupt. And exactly when I told the guy was, Hey, this is you should call this more likely like a very probable return. Assuming our company doesn’t go bankrupt.

And he goes, well, [00:05:00] actually, if it does, the government will step in and cover the payment. And I was like, cool in the governments around. So here’s my fringe case. Let’s say Russia, Ukraine really gets outta hand. We have world war II. Next thing you know, like. You know, we’re living as sewer people. Right. Am I still gonna get my return?

She was just falsely saying, you’re get a guaranteed return born out of either malice or St or ignorance. Maybe ignorance is a nicer way to

[00:05:48] Dan Krueger: say. Yeah. I mean, generally I think some of these, uh, people that are saying things like this or do doing it because they just don’t know any, but there’s a lot of new people getting into the business that, um, [00:06:00] Just don’t really understand the nuances that they need to be aware of when they’re talking about these things.

Cause it’s not guaranteed. So she might. Say it’s guaranteed because in her mind she’s a hundred percent I’m on paying it out, but that doesn’t matter. It’s just, um, yeah. And just the, the main thing I think we want to get across with this episode is anytime somebody offers you a guaranteed return, that’s coming from an investment.

It’s walk away, look, yeah. Run away way because it’s not guaranteed. Like I said before, you’re making a return because you’re taking a risk of some kind and that risk is that you might lose your money. so,

And so I’m just really cognizant of being really careful about what we say and how we present things, because. You know, your word is your bond. And if you say something hyperbolically or overexaggerating, you don’t live up to it, like you’ve just, you know, quest you you’ve just brought your own integrity into question.

So when I see things like that, and I see people wanting to raise capital, and if you’re, if you’re listening to this and you wanna raise capital, just realize that like, that’s not the way to do it. Trying to sell like a, a Goldie Goldie locks or unicorn deal by saying like all these great things and nothing can go wrong.

Like the zero downside, like that’s not selling that. That’s just. It’s something else it’s like desperate marketing. Um, and honestly the people that you wanna work with, they will see through it, like really the investors that you wanna work are sophisticated savvy. My favorite investors are the ones who really understand what we do.

They understand the risks associated with it. Um, because I know at the end of the day, even if something does go wrong, they will understand as we, you know, work our way through it.

[00:07:59] Dan Krueger: [00:08:00] Mm-hmm . Yeah. And I think for people out there that wanna. Talk about consistent, consistent track record of performance with respect to payouts or return to something.

Just talk about that. Don’t use the word guarantee, just say, Hey, over the last, however many years we’ve done this, this and this. And you know, you can extrapolate that however you want. But for like with the insurance example, a hundred years, we’ve delivered 20 years. Just leave it at that don’t file guarantee.

Just say for the last a hundred years, got a long tracker. We’ve delivered 5%.

[00:08:30] Anthony Vicino: and stop very likely return. And that’s why I like the word preferred, like, and, and preferred is a very different thing, but you know, you get preferential treatment preferred

[00:08:38] Dan Krueger: return. Yeah. And so for those of you who haven’t heard us say it before all our deals have preferred returns on them, those are not guaranteed.

I guaranteed. They just make sure that passive investors get paid before we do. Yep.

Uh, so that’s gonna do it for us guys. We appreciate you taking a little bit of time outta your day to, to join the, whatever this was. Uh, if you got any value, make sure you go leave a review over on iTunes and we’ll see you in the next episode.