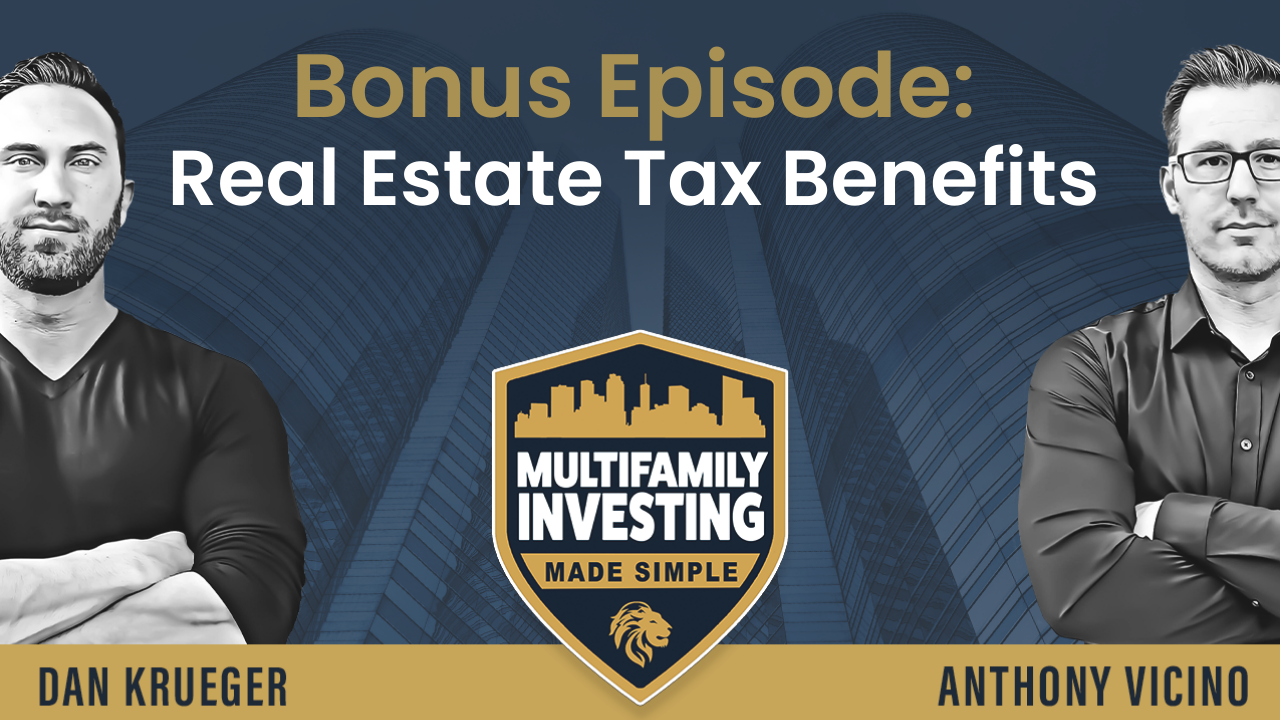 Nobody likes to talk about taxes, but I think everyone likes tax benefits!

In this week’s bonus episode, we are covering one of the best, yet rarely discussed, benefits of investing in real estate.

Dan breaks down depreciation and how it plays a role in the tax benefits an investor receives from investing in real estate, specifically multifamily real estate.

Wouldn’t it be great to deduct the depreciation of a property from your taxes as a passive investor?

Find out how, and more, in another bonus episode of Multifamily Investing Made Simple!

Remember, we released this episode as a Youtube video so make sure to go give that a view!

“Investing in real estate is a valuable resource for society.” – Dan Krueger

[00:00:00] dan: What’s one of the benefits of investing in multifamily properties that you probably didn’t consider or diving into that today. Let’s get.

Hey, what’s going on guys. It’s Dan Kruger, Invictus capital. And today we’re going to talk about one of the best parts of investing in multifamily properties. And it’s not how much money. Uh, that’s what most people focus on initially, how much money am I going to make in a particular investment, but what is oftentimes overlooked and is a substantial benefit of investing in large multifamily properties, whether you’re doing an actively or as a passive investor in syndication is the tax benefits.

Now this sounds like a boring topic and honestly, taxes are kind of boring, but when you get into the benefits of the, uh, of investing in multifamily real estate, Uh, specifically the tax benefits, you start to realize that it’s actually one of the biggest reasons a lot of people get into it, specifically high income earners that are [00:01:00] in high tax brackets.

This is one of the most appealing parts of it. And that’s the tax benefits. So what the heck are the tax benefits, uh, effectively? What we’re going to talk about today is depreciate. Now, this is something that people might be familiar with, uh, from owning a home, um, or even leasing a car. Uh, depreciation is the theoretical loss of value of an asset over time as it was.

And what the IRS allows you to do is take that depreciation and deduct that from your taxable income on that property. So, uh, the logic there is that the property is wearing out over time. To, uh, you need to be, I want to say compensated for that, but that needs to be accounted for somehow. And so the IRS allows people to take that depreciation as an expense, but it’s a Phantom expense.

No money goes out the door. Uh, and really the, the logic here is that, uh, investing in real estate is a valuable resource for society. And so the IRS has created this depreciation component, uh, on these types of assets to encourage people to invest in. It’s not a tax loophole. It’s not a skeezy thing to do.

It’s just the IRS and the government saying, Hey, uh, not everybody out there can afford to buy a place to live, or maybe they just don’t want to. And having an option, uh, where they can rent something is extremely valuable to society. And so that’s why there’s this incentive here. [00:03:00] So this isn’t a skeezy loophole.

It’s just the government trying to encourage people to invest in real estate because it helps, uh, helps out the society at large. And so what we can do in larger multifamily properties or any. Uh, real estate actually is, uh, take that depreciation and accelerate it, uh, because realistically not everything in the buildings is going to last for 27 and a half years.

And so what we do is we have a cost segregation study done, which is where an engineer comes in and analyze the property and breaks down all the components into different buckets of their actual useful life and what we’re allowed to do, uh, with the most recent tax laws over the, uh, back in 2016. We’re allowed to take all of that appreciation that doesn’t fall in the 27 and a half year bucket, which is almost all of it.

It’s a large part of it and cram it all into the first year. And that means that on average, what we’ve seen with our investors is an investor putting in a hundred thousand dollars might see 40 or $50,000 of losses show up [00:04:00] on their K one in the first year. So, K one is a statement that you get every year from your.

It says how much you made or lost in that given year. And if you were to invest a hundred thousand dollars into one of our. You know, on average, you’re probably getting maybe seven to $10,000 of distributions in the first year, about seven to 10%. And if you’re getting 40 to $50,000 of depreciation losses, uh, guess what that, uh, cashflow that you received in your bank account, uh, is actually not going to be taxable because you get to deduct that big depreciation expense.

And so it makes this investment vehicle incredibly tax efficient, uh, compared to just about everything out there. Investing in energy, right? If you’re drilling for oil, the government, I don’t know if you realize this, our government likes oil. Uh, if you’re doing that, they have very similar incentives there.

Um, but other than that, other than real estate and, uh, energy production, um, this has gotta be one of the best places to invest money in a tax efficient way. And this is one of the best things for people, especially those in high tax [00:05:00] brackets to take into consideration, uh, because it’s not all about how much money you make.

Uh, it’s about how much you actually get to keep. And I think people realize that as they get older and make more money. So if you’re younger and this isn’t really on your radar yet, and you don’t really care about it yet, it’s worth knowing about it’s worth appreciating the benefit. Uh, if you have any other questions about this, don’t hesitate to reach out, uh, check out the podcast.

Multifamily investing made simple. We talk about this kind of stuff all the time, and I will see you guys in the next video.