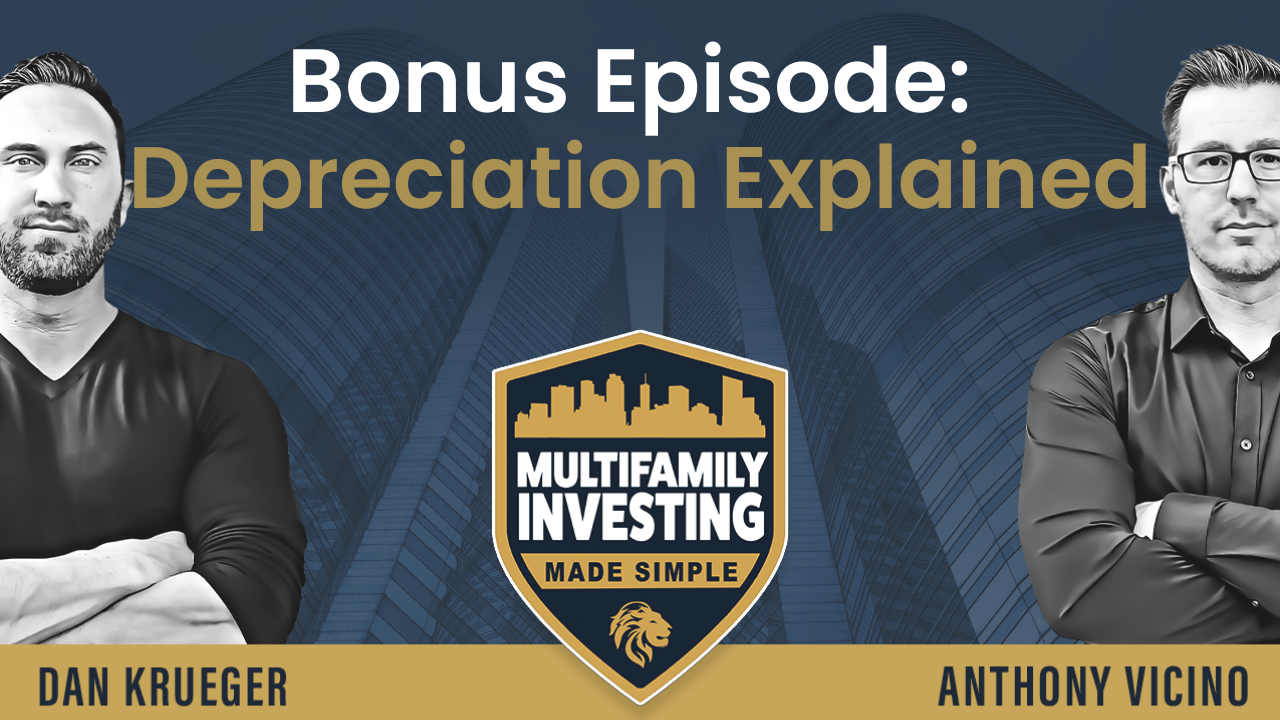 Now, while we are putting this out as a podcast episode, we HIGHLY recommend you go watch this YouTube video. Dan was kind enough to provide some visuals in this video… his favorite, spreadsheets!

In this video/podcast Dan dives into depreciation and the tax benefits of investing in multifamily real estate. Dan actually takes us through an average value-add multifamily deal, so you can see the benefits for yourself!

All of this, and more, on another episode of Bonus Episode of Multifamily Investing Made Simple.

“Real estate has gotta be one of the best tax investments that you can make.”  – Dan Krueger

[00:00:00] Dan Krueger: So you might’ve heard the depreciation and the tax benefits of multifamily investing is one of the best parts of it. And it is, but how does that actually work? That’s what we’re going to dive into today.

Dan Krueger: What’s going on guys. It’s Dan Kruger from Invictus capital. And today we’re going to dive into depreciation and the tax benefits of investing in multifamily real estate. Now, if you want an overview of, of what the depreciation or I should say, the accelerated depreciation concept is, uh, taking a look at our other depreciation video link down below.

Uh, but for today’s example, we’re going to take a look at what a deal would look like or what the. Uh, the tax implications might look like for somebody, uh, in an average value add multifamily deal that utilizes accelerated depreciation and tries to capture all those tax breaks. Real quick before we get into it.

I am not a CPA. Anthony is not a CPA. We don’t pretend to be CPAs. And so for today’s example, we’re going to keep it very high level simply to illustrate a concept a, this isn’t by no means, uh, something that’s going to be representative of your tax situation because everyone’s situation is quite unique.[00:01:00]

And to really dive deep on this, uh, you’re going to be best served by talking to your CPA about a potential deal here. But now that we’ve got that out of the way, let’s dive into this. So up top here, you’ll see I’ve got this investor proforma based case. Um, and you can just ignore base case. It’s not really relevant here.

What’s really important is that this is the type of, uh, slide you’re going to see in a deck, uh, from an operator who’s presenting a deal. And this is probably the side that people flip to the first. Uh, at first it’s just basically saying here’s how much this operator is projecting. You’re going to make on your.

In this opportunity. And so you might be looking at this and saying, oh yeah, the IRR that looks great cash and cash looks amazing. This looks like a heck of a deal. Uh, but what are the tax implications of this? I’ve heard the real estate is great for tax benefits, but what does that actually mean? And what we’ve got with depreciation is effectively an incentive from the U S government to get people to invest in real estate.

It is not a loophole. It’s not excuse a thing where you’re trying to Dodge taxes, [00:02:00] uh, investing in real estate benefits society, because it provides housing solutions for people that either can’t afford to buy a place to live or just don’t want to. And so the depreciation. Uh, the accelerated depreciation that we’re using and all these tax benefits are effectively just the government and the IRS, trying to incentivize people to invest in real estate.

So what we do is we have a cost segregation study done on properties that we acquire, and that takes the, uh, um, uh, w what happens is an engineer comes in, analyzes the property, and instead of depreciating the property, uh, in a straight line method, which most people do by default, they take a look at the property and they say, okay, I know the IRS says that it’s going to take 27 and a half years for this building to wear out.

Um, which I don’t know where they got that number. They pulled it out of the sky. It doesn’t really matter. But the point is the standard approach the people will take is that they’ll take the value of the building, not the land divided by 27 and a half years. And that number that you get when you do the [00:03:00] math on that is the amount of depreciation loss that you get to recognize every.

And what that means is any cashflow distributions that you receive from the property you get to deduct the depreciation quote, unquote expense, uh, from that cashflow and only pay taxes on what’s left over. Now, this is a Phantom expense. No one actually cuts a check to anybody. No money actually leaves.

Uh, but when it comes to your taxes, the government allows you to deduct the depreciation from your income on that property. And then when we pay taxes on one side, So right there that that’s pretty good. Not too shabby, but after the tax changes in 2016, we don’t just, we don’t, we’re not only able to accelerate the depreciation, but we can do something called a, we can take something called bonus depreciation, which means we can take vast majority of that depreciation in the very first year that we acquire.

And so here’s how that shakes out, uh, for investors in these types of deals. Uh, from what we’ve seen, [00:04:00] typically, an investor will see about 40 to 50% of the money that they invested show up as a depreciation loss on their K one. The K one is a form that we send out every year to invest in our deals. And just like the statement you get from a brokerage, um, a brokerage that you have, uh, capital in, that’s sitting in the stock market, where basically just says, here’s how much you made or lost in the past.

So when we send out those statements, we’ve seen in general about 40 to 50% of an investor’s capital invested, showing up as a depreciation loss on that. K one. Now the great part about this is that you don’t, if you don’t use all that appreciation in the first year, meaning. In this example, if this person invested $250,000, $112,000, 500, it’s about 45% of what they put in.

That means that 17,500. Not going to be taxable. Nope. You get to use your, your losses, uh, from this depreciation again, Phantom losses, uh, to wash that out and we can chug along here, we’ve still got depreciation. You can see that added up in this call or in this row here. We’ve still got plenty of losses accrue that we can carry forward to future years because we didn’t use them all in year one, only at 17,500 of income.

Even after we crank up our income to almost a 10% rate of return in year two, still got 107,511. And then we get to year three, this is typical for our deals. We’d like to do a refi. Once we improve the property and we get the valuation up higher, we like to refinance that, that lets us extend the terms on our debt.

So you’ve still got plenty of depreciation here for year four and even going into year five. And you’re not even going to have a tax liability until the final year. Again, just an example. Not an account, not an accountant. Can’t give you tax advice. Uh, but this is a very realistic scenario that somebody might see there is going to be a tax liability at the sale.

Uh, but by and large, this is going to have a significantly lower tax liability. Just about any other investment out there with the exception of, uh, energy production. If you’re out there drilling for oil, big surprise, the us government has created some incentives for that industry as well. Aside from energy production.

Real estate has gotta be one of the best tax, uh, investments that you can make from a tax perspective. And so this is really what we want to illustrate here as [00:07:00] byline. A lot, if not all of these early distributions and most definitely the refinance are going to be non-taxable or I should say at least these are texts deferred.

This is a non taxable one, and you’re going to have a little tax liability at the end. But by and large, if you make the same amount of dollars in one of these investments that you do in the stock market, or basically anything else, you’re going to get taxed a lot more. On anything else other than real estate and energy production, generally speaking.

So one of the most efficient vehicles out there, hopefully this makes sense to you guys. If you have any other questions, don’t hesitate to reach out and check out. Multi-family investing made simple our podcasts. You can find it anywhere. Podcasts are, are, uh, are found, uh, check it out on iTunes and leave a review.

And we will see you guys in the next video.